Golf Affirmations That Will Improve Your Game!

Golf affirmations help you believe in yourself and your ability…

Here’s a piece I came across that inspired a ‘golf affirmations’ cartoon.(Please excuse me as I have misplaced the site that I got it from – it was a couple of years ago!) For instance, lets say your chip onto the green wasn’t at all what you had hoped for, and instead you have a very difficult long putt to make for par instead. Rather than rueing the bad chip shot which most people do, you instead project forward to the next shot, and mentally repeat some golf affirmations such as “perfect putt, perfect putt, perfect putt…” , over, and over, and over again in your mind while your partner is hitting his shot. So whenever you hit a bad shot or feel a negative pattern developing, interrupt it with a string of positive golf affirmations, repeated over and over again until the negative thought has been vanquished forever. Ensure that you never allow negative thoughts to take a hold of your thinking on the course again The second round the next day I made sure that I was focusing my energy in seeing the golf ball go into the hole. And sure enough, the next day I shot 71. I had 27 putts and missed six other ones. The funny thing about all this is that once I focused my energy on getting the ball in the hole it was amazing how my swing fell into place. Using golf affirmations really helped.

I dealt with bad ball striking by focusing my attention on getting the golf ball in the hole, no matter what. I can do this. My golf affirmations included: I can achieve my goals. I am completely in control of my game. I will create positive energy around me. What a round of golf – and I put it down to positive golf affirmations!

What golf affirmations can you think of if repeated enough would help your game?

You can make golf affirmations (And cartoons!) can work for your game!

Please put your golf affirmations in the comments box!

These are a couple of Affirmation Cartoon Cards I did for Veronica Lim of http://www.veronicalim.com 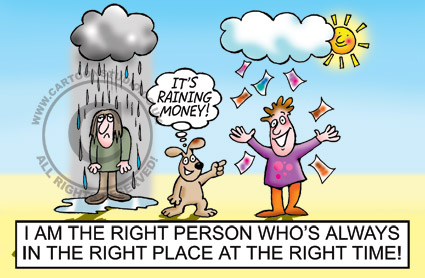 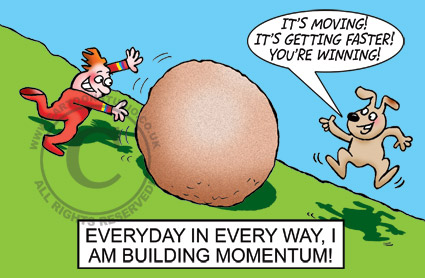 How To Use Affirmations Properly! 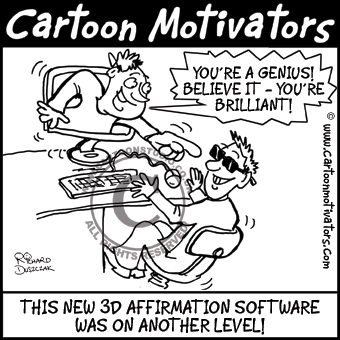 How To Use Affirmations Properly

“I am, therefore I exist,” is a phrase affirming one’s existence as a human being. It may be a simple phrase, but it says everything about why we are saying them. It indicates a confidence not commonly found among others.

But why do people need affirmations? Why do we need to be affirmed? Is existence relative to one’s affirmations?

Affirmations are a very powerful technique to empower one’s subconscious. Once the subconscious is disciplined to believe one’s affirmation, the latter is converted into a positive action for the conscious mind. Through affirmations, we are empowered to do, to work, and to strive for more things. Affirmations allows people to believe in themselves and to put their thoughts into action.

Affirmation is a combination of verbal and visual techniques of a preferred state of mind of a person. Strong affirmations can be very powerful, and can be used by almost anyone to achieve his goals and fulfill his desires. However, the power of an affirmations depends on how strong or weak an affirmation is.

Affirmations are merely an assertion made by a person, about something or about a state of being. A person can affirm those that he chooses to attain, like “I now have a good life.” Being healthy in mind, body, and spirit can also be made possible through affirmation.

An affirmation should be made up of simple but concise words, and it should be short to be more effective. A very long affirmation can work the other way around, instead of creating a positive mindset for a person. A short affirmation can be easily spoken and repeated by a person. It can serve as a mantra that can be repeated over and over again.

To be effective, an affirmation must be repeated. Repetition works and influences the subconscious, which in turn motivates the person into acting out his affirmation. A person who creates the affirmation should be deeply involved with the words he will be using, so he will be able to actualize his affirmation. Writing words that one believes in can be very powerful, and this can be put to good use when creating an affirmation.

While affirmations are generally used to make an individual better, it can also be used to boost or confirm another person’s value. By affirming another person‘s existence, you are helping him improve his self-worth.

Affirmations are a very simple thing that can make a very big difference in a person‘s life. It can be a great motivator and can make things happen.

I am a genius – I keep telling myself and my mind is beginning to believe it!

The Written Word sinks into the subconscious quicker!

One of the simplest, cheapest and most time-saving methods of reprogramming your subconscious mind is to physically write out your goals.

Why? Because your subconscious mind is programmed through Repetition.

Most people don’t benefit much from books because they read and forget. They hardly practice what they’ve learnt, so most of the information stop at the conscious level.

Slowly, easily and surely, the information will sink into your subconscious and you will begin to think, act and achieve

The Written Word Sinks in Quicker!

Affirmations to make you a great footballer!

Charlene Belitz and Meg Lundstrom, authors of the excellent book, “The Power of Flow” describe affirmations like this, ” Affirmations are positive statements you make to yourself, which consciously program the unconscious part of your mind and set the stage for self-fulfilling prophecy. They can be extremely powerful in producing results .” You can see the full article by Michael Mural at: http://www.cartoonmotivators.com/pages/FootyAffirmations.html

Cartoon - The Power of Affirmations!