Cartoon to illustrate some of Vince Lombardi’s inspirational quotes!

Here’s some of my favorite VL quotes about Winning, Winners…

***We would accomplish many more things if we did not think of them as impossible.

***Winning isn’t everything, but the will to win is everything.

***People who work together will win, whether it be against complex football defenses, or the problems of modern society.

***The price of success is hard work, dedication to the job at hand, and the determination that whether we win or lose, we have applied the best of ourselves to the task at hand.

Hope you enjoyed these!?

Cartoons – How to avoid NEGATIVE people!

Do you hang out with ‘can’t do’, ‘no way’ and ‘I’ll never be good at anything’ sort of people? BEWARE, because we become like the people we associate with! Then you’ll constantly be discouraged, on a downer and depressed. Instead, surround yourself with positive people those who can inspire and motivate you so you can, should, and do take action.

Hiding under desk from Mr.Negative!

Avoid negative people and don’t feel guilty about it – period!

Maybe you have a friend who needs to challenge everything you say – avoid them!

Avoid negative people at work.Don’t pick up the phone or answer the door if a certain negative individual is calling or coming by.(See above cartoon!)

Turn the television off during news briefs that focus on what’s wrong in your community or even the world. Negative news travels fast – very fast!(Do you think all this recession would be as bad if it wasn’t for the press/media going on about it all the time?)

Avoid reading newspapers, books or magazines that may portray or write a story on negative people.

Don’t get sucked into negative conversations.

Here’s some proactive steps you can take to align ourselves with positive people: You could also visit this blog everyday!

Visit other online forums and get involved with positive discussions.

Listen to upbeat music, instead of talk show radio programs.

In negative conversations change the subject to something positive so that you don’t get sucked in.

Find other avenues of socializing as opposed to drinking in bars, such as joining clubs, going for walks in the park or opting for a nice dinner out on the town instead. (With exception to bars like this…)

The above cartoon video was produced with Gary Ryan Blair of The Goals Guy. Gary emailed me the audio file and I listened to this and jotted down ideas, created all the cartoons to suit the script and emailed them back to him. There was some going backwards and forwards before we got all the cartoons right. It was something new for me to work on and was very challenging. A very enjoyable project!

by cartooninggenius | May 17, 2012 | motivational cartoon

I think I’m motivated away from pain – I wouldn’t want these guy’s coming around telling me to get off my backside and do something constructive! Let me know what motivates you?(Please say it’s Cartoon Motivators!) 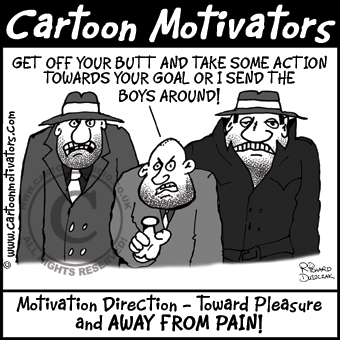 If you’re going to make the incredible effort to be born, then why not live your life to the MAX. It makes sense, doesn’t it? Why do it half shod? Why only let the throttle out half way? Put your foot flat to the floor, spin the wheels, burn some rubber and let loose with a ‘Yahoo’ as you tear up the road in your supercharged hot rod of a life that is yours to live. Too many of us try to play it safe and at the end of the road we find ourselves trapped in self-imposed security. But you know and I know that there’s only one life to live, so let’s LIVE it.
Words © Peter Sinclair 2003

Obstacle or Opportunity – quote and cartoon!