I was searching around for quotes on ‘discipline’ and liked these…

Discipline – the bridge between goals and accomplishment!

“Endurance is one of the most difficult disciplines, but it is to the one who endures that the final victory comes.” – Buddha

“It was character that got us out of bed, commitment that moved us into action, and discipline that enabled us to follow through.” – Zig Ziglar

“With self-discipline almost anything is possible.” – Theodore Roosevelt

“You’ll seldom experience regret for anything that you’ve done. It is what you haven’t done that will torment you. The message, therefore, is clear. Do it! Develop an appreciation for the present moment. Seize every second of your life and savor it. Value your present moments. Using them up in any self-defeating ways means you’ve lost them forever.”

REASON # 6 – You believe that you should enjoy
life whilst you can.

So you might get run over by a car tomorrow…but the
chances are you won’t.

Thanks to advances in healthcare, you could well be
retired longer than you worked for. Never let your
borrowings grow old with you; pay them off as soon as you
can.

What is the biggest cause of arguments between married
couples? Money.

What is the biggest cause of the poor getting poorer and
the rich getting richer? Abuse of money.

Have you noticed that the most addictive substances are
those that have to be replaced again and again?

I would put money firmly in the same category. The
people who want more money the most…go out of their
way to dispose of it and get the thrill as quickly as
they can.
Rich and successful people look after their money.
They nurture it, so that it reproduces and grows. Poor
people waste it.
If you spent $3 every working day on a coffee instead
of putting the money towards paying off a credit card
…then you would be almost $6,500 worse off after 5
years!!!
Just for having a coffee!
I hope that these steps have helped you realise that
it’s the little things that make a difference!

“We are what we repeatedly do. Excellence, then, is not an act, but a habit.”
~ Aristotle

“Excellence is an art won by training and habituation. We do not act rightly because we have virtue or excellence, but we rather have those because we have acted rightly. We are what we repeatedly do. Excellence, then, is not an act but a habit.”
~ Aristotle 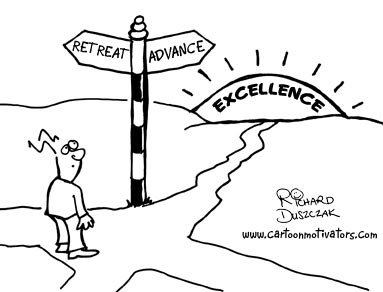 Change Your Self-Talk With AFFIRMATIONS!

CHANGE YOUR SELF-TALK WITH AFFIRMATIONS!

I’ve always believed in magic. When I wasn’t doing anything in this town, I’d go up every night, sit on Mulholland Drive, look out at the city, stretch out my arms, and say, “Everybody wants to work with me I’m a really good actor. I have all kinds of great movie offers.” I’d just repeat these things over and over, literally convincing myself that I had a couple of movies lined up, I’d drive down that hill, ready to take the world on, going, “Movie offers are out there for me, I just don’t hear them yet. lt was like total affirmations, antidotes to the stuff that stems from my family background.
JIM CARREY Actor

I’ve added some new designs to my Motivational Mobile and Cellphone Wallpapers web page – these are like ‘affirmations for your mobile/cellphone!

The DEMON of DOUBT!

The Demon of Doubt – he plagues us all. You’ve got to ZAP him as soon as he enters your mind.

The Demon of Doubt

Here’s a few ‘doubt’ quotes to chew on…

“Any belief worth having must survive doubt” (Sorry forgot where I got this from!)

“Our doubts are traitors and make us lose the good we oft might win, by fearing to attempt” – William Shakespeare

“When you doubt your power, you give power to your doubt” (And this one!)

“What makes a river so restful to people is that it doesn’t have any doubt – it is sure to get where it is going, and it doesn’t want to go anywhere else.” – Hal Boyle