Cartoon strip – Knocked down – Get Back Up!

Had this in my In Box this morning, thought it was worth sharing with you.

The Most Natural Thing To Do When You Get Knocked Down Is To Get Up How we respond to failure and mistakes is one of the most important decisions we make every day. Failure doesn’t mean that nothing has been accomplished. There is always the opportunity to learn something. What is in you will always be bigger than whatever is around you.

We all experience failure and make mistakes. In fact, successful people always have more failure in their lives than average people do. You will find that throughout history all great people, at some point in their lives have failed. Only those who do not expect anything are never disappointed. Only those who never try, never fail. Anyone who is currently achieving anything in life is simultaneously risking failure. It is always better to fail in doing something than to excel in doing nothing. A flawed diamond is more valuable than a perfect brick. People who have no failures also have no victories.

The College Of Hard Knocks!

We have only failed when we do not learn from the experience. The decision is up to us. We can choose to turn a failure into a hitching post, or a guidepost.

Here is the key to being free from the stranglehold of past failures and mistakes: learn the lesson and forget the details. Gain from the experience, but do not roll over and over in your mind the minute details of it. Build on the experience, and get on with your life.

Remember: the call is higher than the fall. 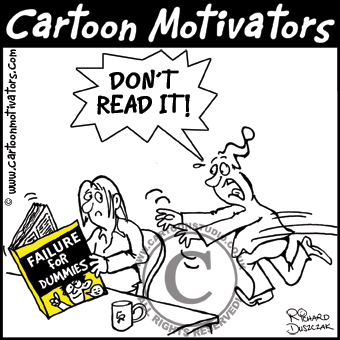 Here’s a few ‘Failure’ quotes I found on my surfing travels:

My reputation grows with every failure. – George Bernard Shaw

Failure is instructive. The person who really thinks learns quite as much from his failures as from his successes. – John Dewey

There are two kinds of failures: those who thought and never did, and those who did and never thought. – Lawence J. Peter

Those who try to do something and fail are infinitely better than those who try nothing and succeed. – Lloyd Jones

I’ve missed more than 9,000 shots in my career. I’ve lost almost 300 games. 26 times I’ve been trusted to take the game winning shot and missed. I’ve failed over and over and over again in my life and that is why I succeed. – Michael Jordon

Motivational cartoon – The Brink of Failure or the Brink of SUCCESS!?

No man ever achieved worthwhile success who did not, at one time or other, find himself with at least one foot hanging well over the brink of failure. – Napoleon Hill

Here’s a couple more ‘failure’ quotes that I liked…

Failure should be our teacher, not our undertaker. Failure is delay, not defeat. It is a temporary detour, not a dead end. Failure is something we can avoid only by saying nothing, doing nothing, and being nothing.– Denis Waitley

One of the reasons mature people stop learning is that they become less and less willing to risk failure. – Author Unknown