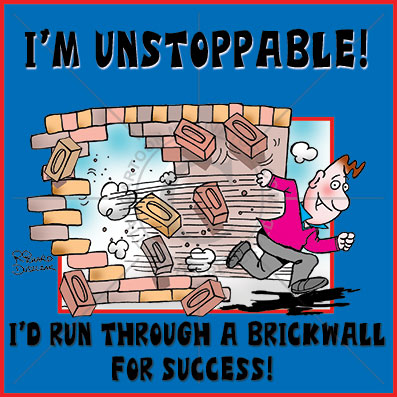 “So many people will tell you ”no”, and you need to find something you believe in so hard that you just smile and tell them ”watch me”. Learn to take rejection as motivation to prove people wrong. Be unstoppable. Refuse to give up, no matter what. It’s the best skill you can ever learn.”

Here’s an extract from Think and Grow Rich by Napolean Hill that sparked off some cartoons… Persistence!

There is no substitute for persistence! It cannot be supplanted by any other quality! Remember this in the beginning and it will hearten you when the going may seem difficult and slow. Those who have cultivated the habit of persistence seem to enjoy insurance against failure. No matter how many times they are defeated, they finally arrive up near the top of the ladder. Sometimes it appears there is a hidden guide whose duty is to test people through all sorts of discouraging experiences. Those who pick themselves up after defeat and keep on trying arrive; and the world cries, “Bravo! I knew you could do it!” The hidden guide lets no one enjoy great achievement without passing the persistence test. Those who can’t take it simply do not make the grade.. Those who can “take it” are bountifully rewarded for their persistence. They receive, as their compensation, whatever goal they are pursuing.

Have you read ‘Think And Grow Rich? Let me know if it changed your life like it did mine!

Nothing can take the place of persistence!

One of my favourite quotes is from Calvin Coolidge, the 30th President of the USA:

“Nothing in this world can take the place of persistence. Talent will not; nothing is more common than unsuccessful people with talent. Genius will not; unrewarded genius is almost a proverb. Education will not; the world is full of educated derelicts. Persistence and determination alone are omnipotent. The slogan ‘press on’ has solved and always will solve the problems of the human race!”

Persistence – perseverence – that’s what it’s all about!

Nearly 100 million George Foreman Grills have sold since 1995 and George Foreman is now one of the most highly paid and recognized celebrity endorsers in the world. But his life is not one of just business success. Foreman is also a community leader, father, husband, world-champion boxer and—best yet—his life has meaning.

Apply Foreman’s philosophies for success in your life:

2. Integrity: “You must preserve the quality of your name, your integrity. You don’t want to lie about anything. And it’s something that people will be happy about once they get to know you. Because people count on you.”

4. Resilience: “You’re going to fail if you do enough business. But you can always come back because you’ve got some integrity, and people need that.”

5. Persistence: “It may take a year, it may take three or four years, but you’re going to hit something so you have something to put on the table for your family.”

6. Legacy: “You want to leave something, you really do. I mean, in the end, statues and all those things, they don’t mean anything. Leave something that we’re all going to benefit from.”

Characteristics of a successful footballer – cartoon!

Characteristics of a Successful Footballer

A recent client ask for some motivational football/soccer cartoons, above is a half finished cartoon I came across while looking for something in my archives for ‘success characteristics’.

You can see this other motivational football/soccer cartoons at the following URL….