10. “There ain’t no free lunches in this country. And don’t go spending your whole life commiserating that you got the raw deals. You’ve got to say, ‘I think that if I keep working at this and want it bad enough I can have it.’ It’s called perseverance.” Lee Iacocca

9. “Most of the important things in the world have been accomplished by people who have kept on trying when there seemed to be no help at all.” Dale Carnegie

Perseverance. - I want it bad enough!

7. Don’t be afraid to give your best to what seemingly are small jobs. Every time you conquer one it makes you that much stronger. If you do the little jobs well, the big ones will tend to take care of themselves. – Dale Carnegie

6.  When the world says, “Give up,”Hope whispers, “Try it one more time.”
~Author Unknown

5. “People of mediocre ability sometimes achieve outstanding success because they don’t know when to quit. Most men succeed because they are determined to.” George E. Allen

4. “I do not think there is any other quality so essential to success of any kind as the quality of perseverance. It overcomes almost everything, even nature.” John D. Rockefeller

2. “Great works are performed, not by strength, but by perseverance.” Dr. Samuel Johnson

1. “Consider the postage stamp; its usefulness consists in the ability to stick to one thing until it gets there.” Josh Billings

Looking forward to hearing your comments on these perseverance quotes! Richard

Nurturing a feeling of success attracts it into your life! 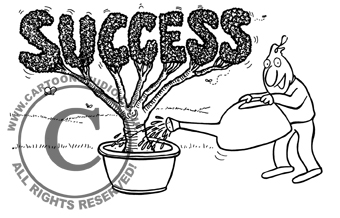 “My list of ingredients for success is divided into four basic groups: Inward, Outward, Upward and Onward.” David Thomas

“Success is not permanent. The same is also true of failure.” Dell Crossword

Flaming enthusiasm, backed by horse sense and persistence, is the quality that most frequently makes for success.
Dale Carnegie

Eighty percent of success is showing up.
Woody Allen

Aim for success, not perfection. Never give up your right to be wrong, because then you will lose the ability to learn new things and move forward with your life.
Dr. David M. Burns

Cartoon on SLIMMING and some motivational quotes!

A few years ago I worked with Diet and fitness guru Rosemary Conley on producing some motivational cartoons for her UK magazine. Here’s another one of the cartoons I drew up for her… 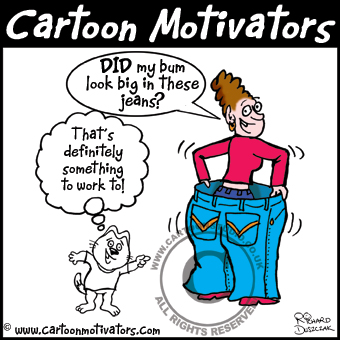 Your stomach shouldn’t be a waist basket.  ~Author Unknown

A diet is the penalty we pay for exceeding the feed limit.  ~Author Unknown

More die in the United States of too much food than of too little.  ~John Kenneth Galbraith, The Affluent Society

In the Middle Ages, they had guillotines, stretch racks, whips and chains.  Nowadays, we have a much more effective torture device called the bathroom scale.  ~Stephen Phillips

I keep trying to lose weight… but it keeps finding me!  ~Author Unknown

I never worry about diets.  The only carrots that interest me are the number you get in a diamond.  ~Mae West

The older you get, the tougher it is to lose weight, because by then your body and your fat are really good friends.  ~Author Unknown

Never eat more than you can lift.  ~Miss Piggy

This QUOTE made me smile!

There are two rules for success: 1) Never tell everything you know.

Happiness is to be found along the way!

“Happiness is to be found along the way, not at the end of the road, for then the journey is over and it is too late. Today, this hour, this minute is the day, the hour, the minute for each of us to sense the fact that life is good, with all of its trials and troubles, and perhaps more interesting because of them.”

Robert R. Updegraff
Author of “Be Thankful For Your Troubles”